In 1986, ABES was created to help establish a more open market for software and associated technical services, which would allow Brazil to compete internationally and recover from technological backwardness. At that time, the country was experiencing a period of market reserve in the Information Technology sector, incompatible with the search for intelligent and innovative solutions.

A year later, Law No. 7646/87, the first software law, was promulgated and, timidly, the market took its first steps towards regulation. However, piracy was already insinuating itself as a problem of serious proportions to be faced. In 1988, a first educational campaign was launched against the use of illegal software and, in 1989, legal actions were taken against companies.

In 1990, the Collor government started opening the country to globalization and the Consumer Protection Code was created. In this climate of change, ABES and other related entities contributed to the establishment of policies for the information technology sector with the National Information Technology Council (CONIN), aiming to mitigate the impacts of the market reserve in the sector. Protectionism proved to be unfeasible.

With the fall of the market reserve, the scenario started to change and some national software producers started to take flight abroad. But, as the route is two-way, many foreign companies have established themselves in Brazil and the user now has access to products that previously only obtained in an irregular way.

The Brazilian market responded well to this new reality. Sales channels have expanded and the big boom in the acquisition of microcomputers and software begins to happen, with the equipment being sold even in supermarkets. The internet has become a reality, accompanied by the growth of e-commerce, home banking and the expansion of telecommunications, with emphasis on cellular telephony.

Law No. 7646/87 was repealed in 1998 with the enactment of the new Law 9609/98, which began to legally protect the authors of computer programs and the companies that market them. However, the work aimed at the legal protection of software, the regulation of the commercialization of programs and the reduction of taxes is always in progress.

Today, ABES is sure that the 21st century is the century of software! The Software Sector is one of the great economic opportunities that Brazil has ahead of it to transform itself into a world provider of unique products and services. For this reason, ABES 'efforts will always be focused on its mission.

The association has actively participated in the evolution experienced by the country, will continue to highlight the importance of the Brazilian Software and IT Services Industry (IBSS) and to demand public policies that create a strong sectorial model and a strategic vision appropriate to the global reality.

The following is a summary of the main milestones in the history of ABES, of the achievements achieved for the sector, especially in the legislative sphere.

2022 – ABES joins the Brazil Network of the Global Compact, linked to the UN Global Compact, the world's largest corporate sustainability initiative, which aims to mobilize the business community in the adoption and promotion of good management practices.

2021 - Launch of Mobilization for Inequality Reduction, in partnership with the Observatory of the 3rd Sector and ReUrbi, which aims to support digital inclusion and training projects, through the disposal and recycling of technology equipment.

2020 - Historic decision for the sector with the end of the judgment in the STI of the ADIs No. 1945-MT and 5659-SP  on the collection of ICMS or ISS. The result finally defined that ISS is levied on the commercialization of software, according to legal arguments of ABES defended along its trajectory and in court.

- Launch of ABES Academy, with the course on the General Data Protection Law.

- Creation of the WGs on eSocial and Public Procurement.

- Creation of the Business Development Committee.

- In the economic area, ABES highlights the governmental measures to face the effects of the pandemic, which counted on the commitment of the association and dialogue with the Federal Government:

2018 - Launch of An Ethical Company Program.

- Enactment of the General Data Protection Law (Law No. 13709/18), the legal framework in which ABES participated in the deliberations.

- Development, in partnership with the consultancy EY, of the free tool for the Diagnosis of the adequacy of companies to the LGPD.

- ABES launches its Integrity Program, which includes the provision of an independent reporting channel, the updating of its Code of Ethics and the launch of the Policy Guide for Interaction with Public Agents.

- ABES launches the Innovation Promotion Guide, in partnership with the consultancy ABGI.

- Commemoration of the 30th anniversary of ABES.

2015 - Establishment of important partnerships with the objective of strengthening the technology sector in the country. Among them, with WENOVATE - Center for Open Innovation Brazil, organizer of the “100 Open Startups” movement; with the Sul-Riograndense Association for Supporting Software Development (SOFTSUL); Softex Campinas, Paulista Innovation Network (RPI - SP), Tecvitória - Incubator for Technology-based Companies (ES), International Center for Software Technology (PR and AM); and the BH-Tec (MG), Porto Digital (PE) and Itaipu (PR) technology parks.

- Creation of the SaaS Committee, focused on the Software as a Service model, and the Taxation Working Group, linked to the Regulatory Committee.

- Launch of the ABES Conecta! Platform, through which members can announce special offers of products and services to companies that are members of the entity.

2014 - Launch of the Innovative MPME credit line to finance the introduction of innovations in the market, in partnership with various agencies and entities according to each Brazilian state and with the participation of the BNDES.

- Joined the social networks Linkedin, Facebook and Twitter to expand its communication, relationship and dialogue channels with associates and other audiences.

- Possession of the entity as a member of the National Council to Combat Piracy (CNPC), an organ linked to the Ministry of Justice.

- Signing of a cooperation agreement with CIETEC, with the objective of supporting the development of incubated companies and innovative technology-based startups.

- Launch of the “Legal Entrepreneur” campaign with the objective of combating unfair competition and fostering national competitiveness, exploring the importance of using legalized software.

- Creation of the Innovation and Promotion Directorate, responsible for aggregating all information and actions to favor the access of associates to innovation and public or private financial resources.

2012 - Reopening of the ABES headquarters, located in São Paulo, together (SP), together with the launch of a new marketing and communication program, which includes renewing the logo, launching the entity's portal and implementing a relationship center

- Launch of the ABES Relationship Center and ABES Portal, to expand the entity's communication and contact points with its associates and society, in addition to the renovation of its headquarters

2011 - Launch of the Exporte Legal Campaign, to alert entrepreneurs about the importance of adapting to the new reality of world trade and stimulating the use of licensed software

2007 - Achievement of the non-incidence of “CIDE” of 10% on shipments abroad resulting from the commercialization of software in the country, with the approval of Federal Law No. 11,452

2006 - Inclusion of software companies in Simples.

2002 - On November 13, ABES opens its own headquarters in São Paulo, located in the Moema neighborhood. 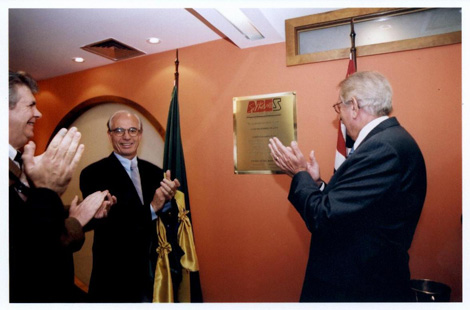 Inauguration of ABES Headquarters in 2002

2001 - ABES presents a bill that defines the provision of software as a service, subject only to ISS

1994 - Exemption from prior registration for computer programs

1992 - Achievements in the tax area related to ICMS

1989 - Start of the Campaign to Combat Copyright Infringement

1986 - Foundation of Abes with the participation of 16 companies

Meeting that gave rise to ABES in 1986